Tinnitus, the perception of a sound without an external or internal source, is produced when the subcortical or cortical auditory system compensates, due to aberrant plasticity, for a peripheral, increasing the spontaneous activity, unbalancing the excitatory/inhibitory activity at the synapses, or altering the tonotopic distribution of frequencies at the primary auditory cortex. It consists of a pathology of the cortical or subcortical auditory system triggered by a peripheral deficit.

Sound is characterised by two main features, frequency (spectral contents) and intensity. Frequency is coded in the tonotopic map at the cochlea, which is maintained along the all afferent auditory path. Intensity is mainly coded in the firing rate of auditory fibres. A low intensity is coded in a slow firing rate, and a high intensity arise a fast firing rate. In fact, each neuron of auditory bundle is tuned between minimum and maximum firing rates. At zero intensity, i.e. in absence of sound, the firing rate of each neuron is not zero but a residual one named spontaneous firing rate. Thus, auditory fibres trigger spikes even in silence. This spontaneous activity plays an important role in the tinnitus.

The perception of sound is a complex process involving a peripheral source, filtering at the outer ear, impedance matching at the middle ear, frequency analysis and mechano-electrical transduction at the inner ear, frequency-tonotopy and intensity-firing rate at coding the inner ear-auditory nerve synapsis, pre-processing at the auditory path, and decoding and perception at the auditory cortex.

It is well known that brain is plastic. This means that it compensates for a reduced peripheral input. The phantom syndrome is a well-known example of brain plasticity: people who have been amputated some member still feels pain arising in this member. In the auditory case, a peripheral deficit of sound can arise hyperactivity, hyperactivity and/or tonotopic map alteration in the subcortical or cortical auditory path, this in turn causing tinnitus. 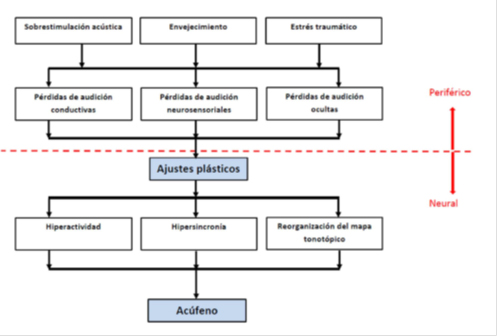 Many people have felt sometime this neural sound, after exposure to a loud sound or after a prolonged stay into an anechoic room, although it usually disappears after a certain time. However, it becomes permanent for some people (roughly 1-2% of population), generating irritability, annoyance, anxiety, stress or depression, and therefore a severe loss of quality life. In fact, tinnitus itself does not hurt, being these strong emotional effects its foremost problem. The auditory system has connections with many other brain systems, as the limbic and the central autonomous systems. When the tinnitus signal (hyperactivity, hypersinchrony, or alteration of tonotopy) propagates to others brain systems, particularly when it activates the limbic and autonomous systems, it evokes several negative reactions (mainly stress, anxiety and depression).

Despite the intense pharmacological research to find a remedy for tinnitus, nowadays there is not any drug approved by the American or European agencies. But, fortunately, several therapies have been proposed providing tinnitus relief. Many of them combine counselling, for deactivating the negative emotional reactions, and sound stimulation, for diminishing the tinnitus signal.

The explanation of tinnitus as a plastic mechanism predicts the possibility of reverting it by stimulating properly the auditory system. The aim of sound therapies is to produce plastic changes in patients that lead to habituation and/or residual inhibition. Habituation acts on the limbic and central autonomous systems, so that patients are able to life with their tinnitus, although they continue perceiving it, but driving out the connotations that reduce their life quality. Residual inhibition is the reduction or disappearance of the tinnitus when the sound stimulus is switched off. Inhibition can last from few seconds to days. The dependence of the inhibition extent with the stimulus parameters, such as spectrum, intensity and duration, is not yet well understood. Therefore, a lot of sound stimuli for tinnitus treatment have been proposed. 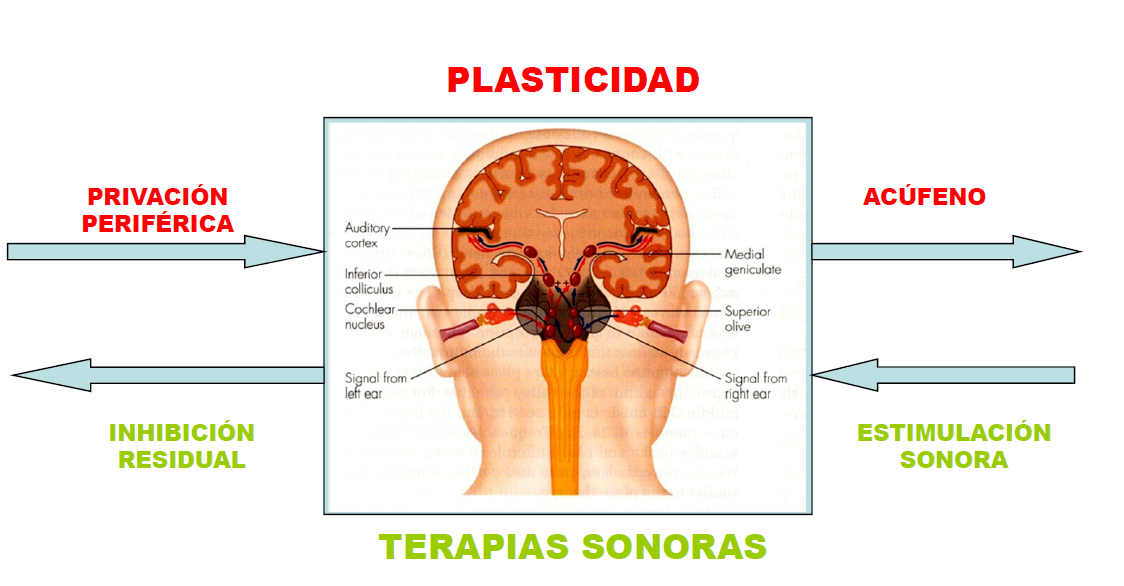 The ITEFI has developed the EAE (Enriched Acoustic Environment) therapy, which consists of a sequence of tones (pip, burst or gamma), each of them with random frequency within the hearing range of patient, and amplitude proportional to the hearing loss to that frequency. Wideband stimuli, similar to those of TRT (Tinnitus Retraining Therapy), but inverse filtered by the hearing loss curves, can be also generated. 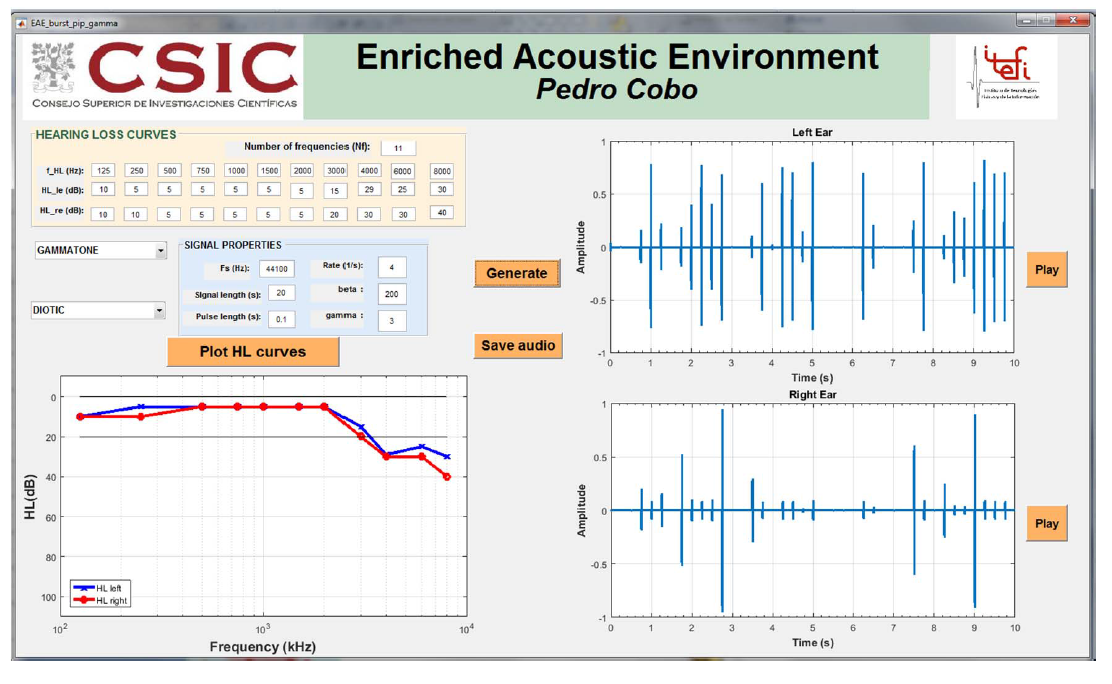 Thus, EAE consists of a customised therapy for each patient, as it take into account the hearing loss, which is the main cause triggering tinnitus. In the case of EAE with gammatones, it is the most selective therapy, as gammafilters match the frequency response curves of each part of the auditory path.