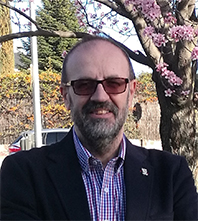 Luis Hernández Encinas was born in 1957 in Navalmoral (Spain), he obtained his Graduate in Mathematics at the University of  Salamanca (Spain) in 1980, and his Ph.D. in Mathematics at the same university in 1992. He is a researcher at the Department of Information Processing and Cryptography (TIC) at the Institute of Physical and Information Technologies (ITEFI), Spanish National Research Council (CSIC) in Madrid (Spain). He has participated in more than 30 research projects. He is author of several books and patents, more than 150 papers, more than 100 contributions to workshops and conferences, he has supervised several doctoral thesis and has served as referee for different SCI journals and for many international conferences.

On the other hand, he is the Patron representing the CSIC in the Patronato de la Fundación Círculo de las Tecnologías para la Defensa y la Seguridad (https://fundacioncirculo.azurewebsites.net/) and he is the representative of the CSIC in the Red de Excelencia Nacional de Investigación en Ciberseguridad (RENIC, https://www.renic.es/en), of which the CSIC currently holds its Vice Presidency.